A couple of years ago, I was in the backseat of a convertible headed to Santa Ynez wine country. My sister and brother-in-law were in the front, and my then-husband beside me in the back. As we sped up Highway One, along the oceanfront, I read this short story in The New Yorker, penned by one of my very favorite authors. A year into my marriage, and already questioning it, this was a moving, strikingly voyeuristic reflection on long-term relationships that left me somehow full of grief. Today, I read it with completely different eyes. I loved it then, and I love it now. 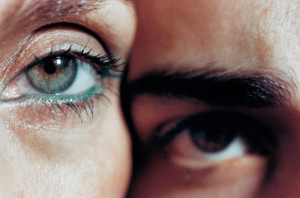 I was not able to run long distances. You were so kind to my sister when I didn?t know how to be kind. I was just trying to remove a stain; I made a bigger stain. You were just asking a simple question. I was almost always at home, but I was not always at home at home. You were not able to cope with a stack of more than three books on my bedside table, or mixed currencies in the change dish, or plastic. I was not afraid of being alone; I just hated it. You were just admiring the progress of someone else?s garden. I was so tired of food.

We went to the Atacamama. We went to Sarajevo. We went to Tobey Pond every year until we didn?t. We braved thirteen inches of snow to attend a lecture in a planetarium. We tried having dinner parties. We tried owning nothing. We left handprints in a moss garden in Kyoto, and got each other off under a towel in Jaffa. We braved my parents? for Thanksgiving and yours for the rest, and how did it happen that we were suddenly at my father?s side while he drowned in his own body? I lay beside him on the bed, observed my hand reaching for his brow, said, ?Despite everything -? ?What everything?? he asked, so I said, ?Nothing,? or nothing.

I was always destroying my passport in the wash. You were always awful at estimating. You were never willing to think of my habits as charming. I was just insisting that it was already too late to master an instrument or anything. You were never one to mention physical pain. I couldn?t explain the cycles of the moon without pen and paper, or with. You didn?t know where e-mails were. I wouldn?t congratulate a woman until she explicitly said she was pregnant. You spent a few minutes every day secretly regretting your laziness that didn?t exist. I should have forgiven you for all that wasn?t your fault.

You were terrible in emergencies. You were wonderful in ?The Cherry Orchard.? I was always never complaining, because confrontation was death to me, and because everything was pretty much always pretty much O.K. with me. You were not able to approach the ocean at night. I didn?t know where my voice was between my phone and yours. You were never standing by the window at parties, but you were always by the window. I was so paranoid about kind words. I was just not watching the news in the basement. You were just making a heroic effort to make things look easy. I was terrible about acknowledging anyone else?s efforts. You were not green-thumbed, but you were not content to be not content. I was always in need of just one good dress shirt, or just one something that I never had. You were too injured by things that happened in the distant past for anything to be effortless in the present. I was always struggling to be natural with my hands. You were never immune to unexpected gifts. I was mostly just joking.

I was not neurotic, just apocalyptic. You were always copying keys and looking up words. I was not afraid of quiet; I just hated it. So my hand was always in my pocket, around a phone I never answered. You were not cheap or handy with tools, just hurt by my distance. I was never indifferent to the children of strangers, just frustrated by my own unrelenting optimism. You were not unsurprised when, that last night in Norfolk, I drove you to Tobey Pond, led you by the hand down the slope of the brambles and across the rotting planks to the constellations in the water. Sharing our happiness diminished your happiness. I was not going to dance at our wedding, and you were not going to speak. No part of me was nervous that morning.

When you screamed at no one, I sang to you. When you finally fell asleep, the nurse took him to bathe him, and, still sleeping, you reached out your arms.

He was not a terrible sleeper. I acknowledged to no one my inability to be still with him or anyone. You were not overwhelmed but overtired. I was never afraid of rolling over onto him in my sleep, but I awoke many nights sure that he was underwater on the floor. I loved collapsing things. You loved tiny socks. You were not depressed, but you were unhappy. Your unhappiness didn?t make me defensive; I just hated it. He was never happy unless held. I love hammering things into walls. You hated having no inner life. I secretly wondered if he was deaf. I hated the gnawing longing that accompanied having everything. We were learning to see each other?s blindnesses. I Googled questions that I couldn?t ask our doctors or you.

They encouraged us to buy insurance. We had sex to have orgasms. You loved reupholstering. I went to the gym to go somewhere, and looked in the mirror when there was something I was hoping not to see. You hated our bed. He could stand himself up, but not get himself down. They fined us for our neighbor?s garbage. We couldn?t wait for the beginnings and ends of vacations. I was not able to look at a blueprint and see a renovated kitchen, so I stayed out of it. They came to our door during meals, but I talked to them and gave. I counted the seconds backward until he fell asleep, and then started counting the seconds backward until he woke up. We took the same walks again and again, and again and again ate at the same easy restaurants. They said he looked like them. I was always watching movie trailers on my computer. You were always wiping surfaces. I was always hearing my father?s laugh and never remembering his face. You broke everyone?s heart until you suddenly couldn?t. He suddenly drew, suddenly spoke, suddenly wrote, suddenly reasoned. One night I couldn?t help him with his math. He got married.

We went to London to see a play. We tried putting aside time to do nothing but read, but we did nothing but sleep. We were always never mentioning it, because we didn?t know what it was. I did nothing but look for you for twenty-seven years. I didn?t even know how electricity worked. We tried spending more time not together. I was not defensive about your boredom, but my happiness had nothing to do with happiness. I loved it when people who worked for me genuinely liked me. We were always moving furniture and never making eye contact. I hated my inability to visit a foreign city without fantasizing about real estate. And then your father was dead. I often wasn?t reading the book that I was holding. You were never not in someone?s garden. Our mothers were dying to talk about nothing.

We were all doing well. I was still in love with the Olympics. The smaller the matter, the more I allowed your approval to mean to me. They kept producing new things that we didn?t need that we needed. I needed your approval more than I needed anything. My sister died at a restaurant. My mother promised anyone who would listen that she was fine. They changed our filters. I wanted to learn a dead language. You were in the garden, not planting, but standing there. You dropped two handfuls of soil.

And here we aren?t, so quickly: I?m not twenty-six and you?re not sixty. I?m not forty-five or eighty-three, not being hoisted onto the shoulders of anybody wading into any sea. I?m not learning chess, and you?re not losing your virginity. You?re not stacking pebbles on gravestones; I?m not being stolen from my resting mother?s arms. Why didn?t you lose your virginity to me? Why didn?t we enter the intersection one thousandth of a second sooner, and die instead of die laughing? Everything else happened – why not the things that could have?

I am not unrealistic anymore. You are not unemotional. I am not interested in the news anymore, but I was never interested in the news. What?s more, I am probably ambidextrous. I was probably meant to be effortless. You look like yourself right now. I was so slow to change, but I changed. I was probably a natural tennis player, just like my father used to say over and over and over.

I changed and changed, and with more time I will change more. I?m not disappointed, just quiet. Not unthinking, just reckless. Not willfully unclear, just trying to say it as it wasn?t. The more I remember, the more distant I feel. We reached the middle so quickly. After everything it?s like nothing. I have always never been here. What a shame it wasn?t easy. What a waste of what? What a joke. But come. No explaining or mending. Be beside me somewhere: on the split stools of this bar, by the edge of this cliff, in the seats of this borrowed car, at the prow of this ship, on the all-forgiving cushions of this thread-bare sofa in the one-story copper-crying fixer-upper whose windows we once squinted through for hours before coming to our sense: ?What would we even do with such a house?? 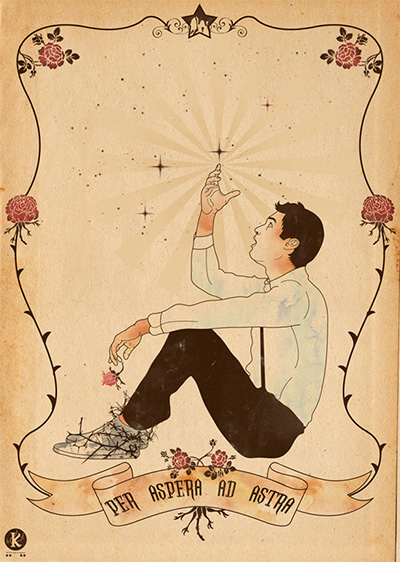 ad astra per aspera, inspiration, life lessons, things I like 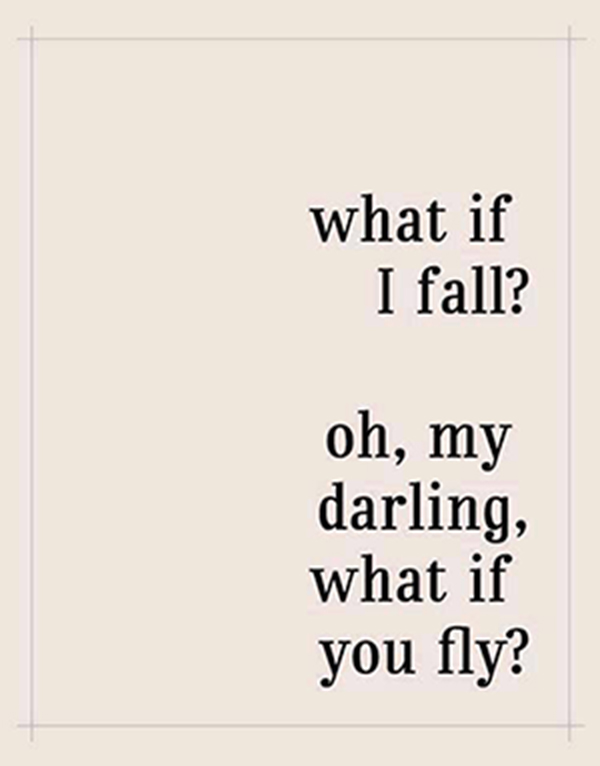 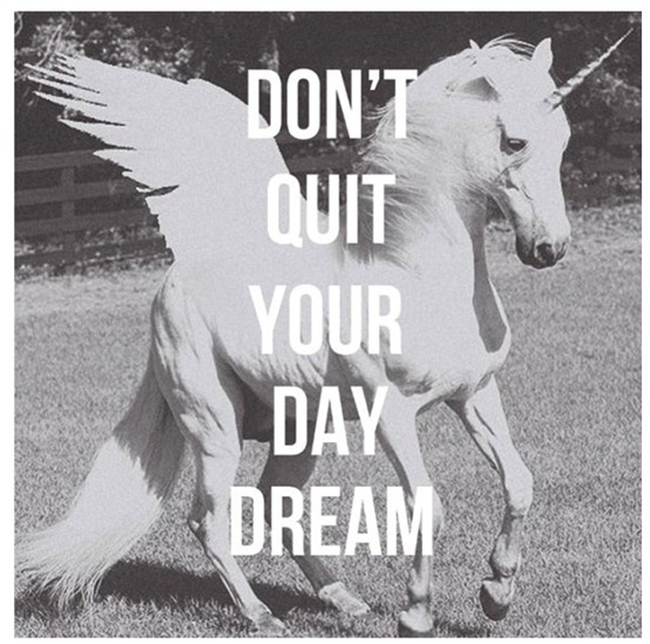