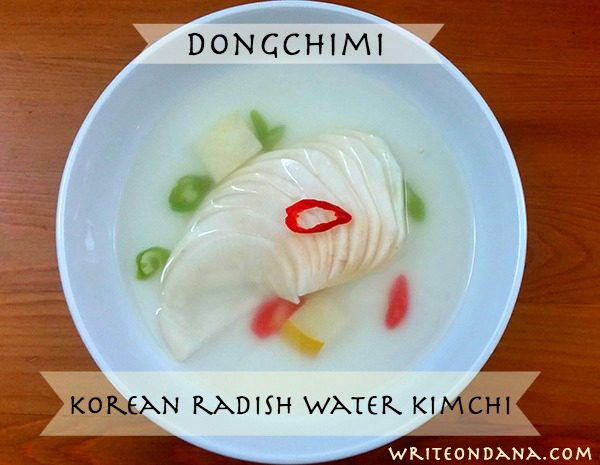 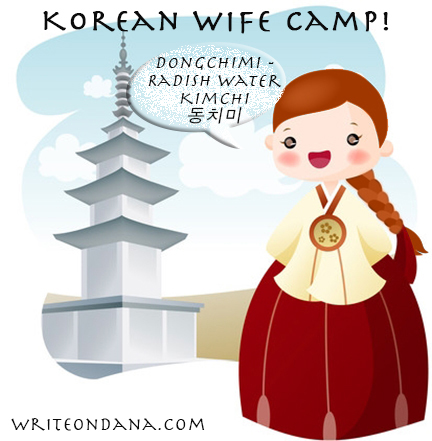 My father in law, (aka Paul’s stepfather), Edgar, loves Korean food almost as much as I do. Together, he and I definitely have the true Koreans in our family beat in terms of our obsession with their own cuisine. So for Father’s Day, we took him to a fun Korean BBQ restaurant called Kang Hodong Baekjong – one of the few in town where the meat is cooked over coals, rather than just a gas burner. It’s so delicious.

But the part of the meal that really caught my attention was a delicious banchan dish called Dongchimi, or radish water kimchi. (Banchan is a blanket term for the fantastic array of free side dishes famously served alongside Korean barbeque.) It was deceptively simple-seeming: just thin slices of “moo” or Korean radish served in a salty, tangy, frosty broth – an utterly refreshing and fabulous palate cleanser. I couldn’t get enough! And while Dongchimi literally translates to “winter kimchi,” the fact that it’s served cold makes it especially delightful in the heat of summertime.

But when I asked my future mother-in-law how it is prepared, she told me it takes too long to make, so she just buys it pre-packaged at the store. What more tantalizing bait for an aspiring cook/wife/mother could there be, I ask you? A challenge! This presented the perfect opportunity for me to learn it, make it, perfect it, and dazzle the shit out of my Korean mother-in-law with the results! 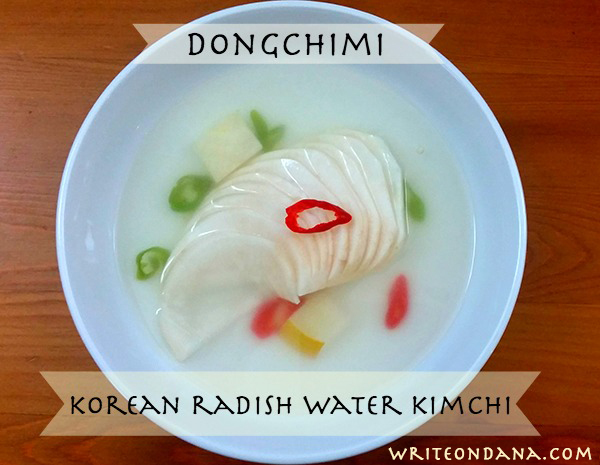 And while my mother-in-law was right, it does take rather a while to make (thanks to the fermentation process), the actual “hands-on” prep time and effort involved is quite minimal. The trick of this dish, really, is patience while it does it’s pickly thing and makes fermentation magic on your countertop. So, to make it simple, I’ll break up the recipe by days.

Day 1:
5 lbs Korean Radishes, cut into pieces about the size of your palm. (If you can’t source Korean radishes, you can substitute daikon, which is available in most supermarkets.)
1/2 cup kosher salt (I use this brand exclusively because it’s free of the caking agents found in other brands)

Grab a large glass jar. I used this one

, which has a gallon and a half capacity and worked perfectly. Place your salt into a bowl, and give the radish slices a good rinse. While they’re still wet, roll them each in the salt until well-coated, and place them into the jar. If you have any leftover salt in the bowl, sprinkle it on top of the radish slices in the jar. Cover and refrigerate it for 4-5 days, during which time the salt will pull moisture from the radishes, softening them and preparing them to absorb all the flavors in the delicious, briney broth you’ll be creating later.

After a few days have passed, you’ll notice about an inch or two of water has collected at the bottom of the jar, which will serve as the base of your brine. Grab the rest of your ingredients, its go time!

Toss the chiles, cubed Asian pear, and green onions into the jar. Place your minced ginger and garlic into a cheesecloth bundle and drop that in, too. 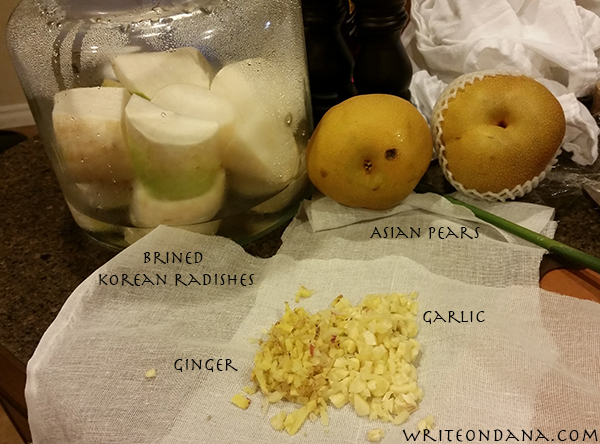 Add your 10 cups of water, give it a good stir, and cover it up again. Then put your patient pants on and leave it to ferment at room temperature on your counter. 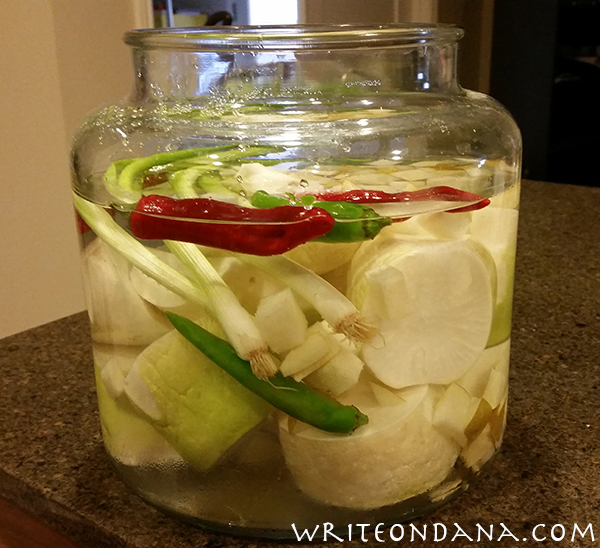 Within a day or less, you’ll notice the formerly clear brine has begun to take on a milky, cloudier hue. That’s when you know the magic is happening! After a day, give the broth a taste, and see if you’re happy with the balance of mild spiciness, tangy tartness, and salty savoriness. Try a bit of radish, too. If it’s too crunchy, you might want to cut your chunks in half to speed up their softening. You want them to still have a bit of crisp to them, but they shouldn’t feel “raw” to the tooth, either. But it’s all a matter of preference. In our case, we left it out for two full days before it achieved perfection. Then just transfer it to the fridge, and take bits of radish and broth to enjoy at your leisure!

I was quite nervous that after all the time that went into making this, it wouldn’t match up the quality of Kang Hodong Baekjong’s delicious dish. But when we had our first bowlful with dinner, I was delighted to find that I loved it and even preferred it to the original! And when Paul declared it “restaurant quality,” I knew we had a hit on our hands. But the biggest win of all was when my Umuni (that’s mother in law in romanized Korean) tasted it, she said it was the best she’s ever had, and begged me to make a jar for her too! I nearly fell down dead on the spot. 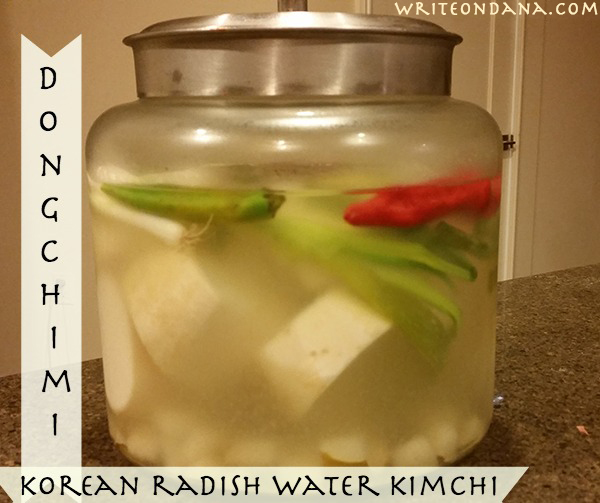 To serve, slice the radish very thinly, and place in a bowl with a ladle or two of the chilled brine and a few chunks of Asian pear. If you have company, toss in a chile or a bit of green onion for color. Eat the veggies, sip the brine.

Dongchimi pairs fantastically with a hearty steak from the grill, or burgers… but I enjoy it with pretty much everything! And because it’s fermented, it’s chock full of nutritious probiotics which support digestive function and gut health (among other great benefits), and high in oxygen saturation, so it’s a wonderful elixir for when you’ve overindulged and find your belly in a bit of gluttonous distress.

I hope you enjoy it as much as I do!

Stay tuned, because next up will be my tried and true traditional napa cabbage kimchi recipe! It took me 5 attempts to perfect it, and I can’t wait to share it with you.

How to cook the perfect holiday turkey in only one hour.